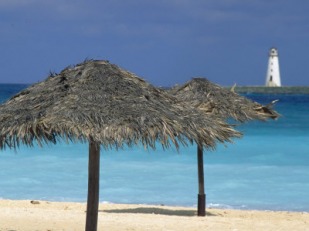 NASSAU, Bahamas — This is a popular vacation spot, and for good reason. There’s plenty to do here, if ac­tivity is your cup of tea, and plenty not to do, if you’re better suited to lying on the beach all day and sip­ping cocktails. Of course the most rewarding va­cation in a foreign land blends re­laxation and exploration, as a friend and I learned on a recent excursion to Nassau.

The Bahamas gives tourists a chance to burn away the stress of the workaday world with a tropical, warm climate (average winter tem­peratures of between 70 and 80 de­grees) and with the easygoing attitude that pervades the islands.

“It’s the friendliness of the natives and the beautiful water that attracts the tourists,” said 40‑year‑old cab driver Eric Butler, who moved to Nassau many years ago from Andros, the largest of the 700 islands that make up the Bahamas archipelago. He said he’s always been glad to meet out‑of‑town vacationers, and “I’m happy to meet more.”

Nearly 70 percent of the Bahamas’ population resides on New Provi­dence Island, on which Nassau is located. Bahamians from the more remote “Out Islands” come here for good jobs and a better way of life. Of course, like elsewhere, bleak economic times have had a negative impact here.

“The local economy is slower than usual,” said Raymond Rolle, a 31­-year‑old bartender who was on the street handing out coupons for entry to a downtown nightclub. “There’s room for many improvements.” The cost of living in the Bahamas is “very high,” he said, and the political atmosphere has begun to stagnate. The Progressive Liberal Party, or PLP, which has been in power for more than 20 years, is “losing cred­ibility day by day,” Rolle said. A British imperial outpost for more than 200 years, the Bahamas became a sovereign state in 1973. A bicam­eral parliament and a prime minister govern the country.

Perhaps the best way to see the island is to take a 75‑cent ride on a jitney (public transportation bus). Then you can see there is more to Nassau than sun, sand and turquoise water. Although the island is small, 21 miles long by seven miles wide, it represents an incredible mix of lifestyles, a weird balance of para­dise and Third World conditions.

Away from the beach resorts and deeper into the island, natives live in small, run‑down homes, clustered tightly together. In the neighbor­hoods and on downtown sidewalks, illegal drugs are sold on the street in view of law enforcement authorities, although punishment is said to be strengthening in the city. Vacationers, however, appear oblivious to local maladies and focus more on their own hedonistic adventures.

Just across Nassau’s harbor, where the mammoth cruise ships make their daily appearances, Paradise Island sits in all of its luxurious glory. The island attracts gamblers and the rich and famous to its strip of fancy hotels and casinos on the beach.

West of downtown, visitors can find splendid Cable Beach, where tourists zip across the water in front of their hotels on Kawasaki Jet Skis and motor boats. Love Beach and Lyford Cay, located on the far west side of the island, have been popular vaca­tion spots among celebrities and those wealthy enough to enjoy the private homes and unspoiled beaches there.

Many tourists bound for the Ba­hamas choose to bypass Nassau for the city of Freeport, located on Grand Bahama Island to the north­west. There, buildings are much newer and the general environment appears cleaner than in Nassau, as the city was developed only 30 years ago by an American financier.

Whether you’re loaded with bucks and can afford the most ele­gant suite in Nassau for the entire winter or you’re able only to stay in a discount room downtown for a few days, the Bahamas experience proves to be a pleasing one.

Just ask a native why he’s stayed around here for so long, and you’re sure to get an honest reply. “Because there’s a lot of good fish and a lot of good conch,” said 66-­year‑old Ernest Brown, referring to the seafood that is such a central part of Bahamian dining tradition.